This weekend saw the first tracks go down at Linear Studios in Leichhardt - we got through 4 songs and it truly was a great experience, recording to tape in the first instance - which we've never done before. Engineers Chris and Wade were masters of their craft and made the whole weekend really memorable....There's still many nights of tracking and mixing ahead - but its great to get started on the whole shebang. 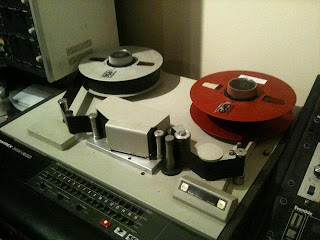 Once Elvis Castro (TMS guitarist) gets back from his tour of North Korea we'll be right back into it ... i really hope a new song emerges in the next couple of months with an album by September. We've got a nice breezy summer song up our sleeve so expect that when the surf is up in December.

Thats all for now - no shows planned but i'm sure once all this is done we'll be back out there.
cheers
Brendan
Posted by The Model School at 05:17 No comments: